Robocall blocking Apps help you get rid of those constant and tiring spam calls that you get bombarded by telemarketers, unknown callers, and robocalls. These spam calls are happening because the Internet has made it incredibly easy and cheap to place thousands of calls in an instant.

What is a Robocall?

A robocall is a type of phone call that uses an automatized autodialer to convey a pre-recorded message. The message looks as if from a robot. Robocalls are often related to telemarketing and political phone campaigns. Robocalls can be scam calls. But not all robocalls are scams. It can also be used for emergency or public service.

If you are searching for a method to get rid of these calls and relieve yourself from the stress of getting your privacy violated, you have come exactly to the right place. Because the right service or app on your mobile can make it safer to talk to other people again, I will also give you information about some robocall blocking apps that can take revenge against these robocalls and unknown numbers.

What happens when someone does Robocall?

Robocalls can range from simple business calls that try to convince you to buy their product to various scam calls that steal your bank and credit card information. So you have to be very careful of robocalls. When someone Robocalls you, the following things can happen:

How can someone Robocall you?

Illegal robocalls are related to scams and identity thefts. Scammers have countless ways to find your personal information and scam call you. They try to act like someone you know and try to get more detailed information about you.

How to find the Best Robocall Blocking App?

No robocall blocking app completely blocks spam calls. These apps will help you to reduce the number of spam calls. However to choose the best spam call blocking app, have a look at its ratings, reviews,  and customer service. along with that, pricing also matters because it is related to quality.

YouMail is one of the fastest among other robocall blocking apps. It replaces your mobile’s existing voicemail feature and identifies when spammers leave messages by using its software.

This software also helps YouMail identify the spammers through a quick crowdsource and block those callers from other phones.YouMail has about ten million registered users.

YouMail does not block the numbers belonging to legitimate callers for its users. YouMail also has an updated feature that will automatically block spoof calls conceived to look like they are coming from known callers.

One of the best features of YouMail is that, plays the known spammers the beep-beep-beep-beep sound of a deadline. This feature tricks them into taking you off their lists. YouMail also transcribes your messages, makes them attainable online, and offers many amusing outgoing message options.

Nomorobo is the simplest app, one of the first robocall blockers on the market with a popular home line service. It is very secure and reliable as it doesn’t sell your data. It also protects your voicemail and calling apps. 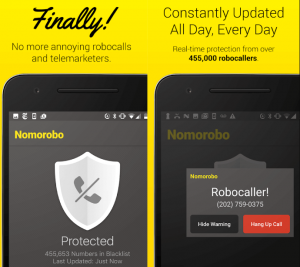 Nomorobo is smart about blocking spoofed calls conceived to look like they are coming from known callers. After installation. You can now differentiate between fake and legal robocalls. The main disadvantage of this app is its lagging speed.

Some of its features include: 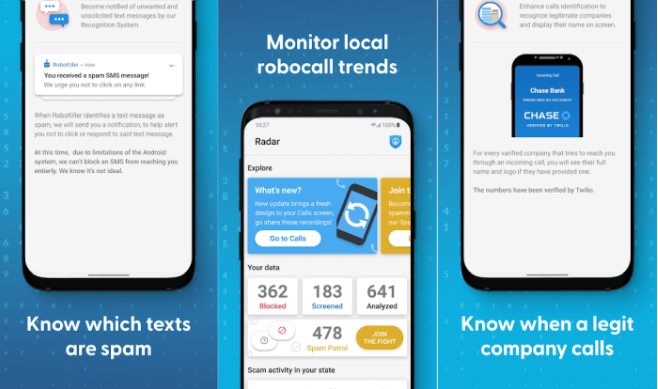 RoboKiller is also the fastest app out there. It has a special feature called “Answer-bot.” It fingerprints the voice-mail messages. Then it keeps human telemarketers and robots on the line by keeping them busy listening to nonsense.

Answer-bot has a range of impersonators. It also has an extended coughing session for someone doing vocal exercises. More than that, RoboKiller sends you a recording of the interaction, which often is hilarious. RoboKiller only uses Answer-bot when it’s a spam call. 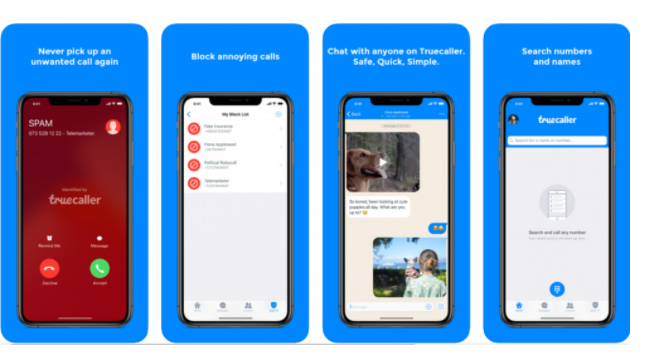 Truecaller is the best option if you don’t want to give up protecting your voice mail. After you install it, it replaces your mobile’s main call app. Then it crowdsources spam numbers from more than 300 million users worldwide.

It automatically blocks top spammers. However, the major problem with this app is that it stuffs in many functions that are not related to robocalling.

Truecaller has the following features:

Hence, with all these features, Truecaller makes it to the list of best robocall blocking apps. 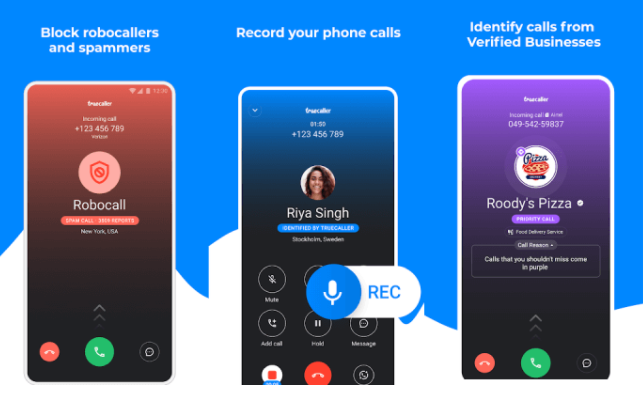 Hiya is a reliable app for protection against spoof calls and fraud numbers, with an integrated caller ID. It blocks fraudsters, spammers and allows businesses to connect with their customers.

It has features like call blocker, fraud detection, phone spam protection, phone number lookup, reverse search, and managing contacts. For instance, you can always know who’s on the other end of the call as Hiya provides you with the true caller ID.

Some of its features are: 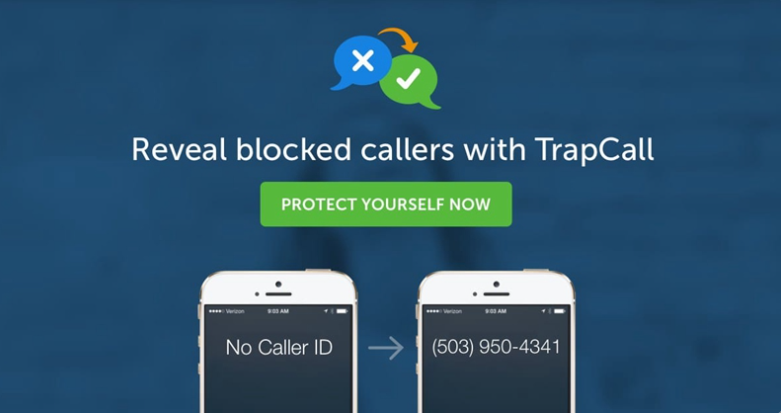 TrapCall helps you take back your privacy by showing you who is hiding behind unknown no caller ID and Restricted numbers. It also ends unwanted spam calls from telemarketers and robocalls.

Moreover, it is a technological boost against the cat and mouse game between the callers and called.

In conclusion, Robocalling can be very tiring and spams. Therefore you need a Roboblocker app to get a read of these robocalls. So, these are the above-mentioned roboblocker apps, and decide which best suits you. Also, tell us in the comment have you ever used any Roboblocker apps?

How Reliable are Spy Apps?

How to Fake your Location on the iPhone without Jailbreaking