Snapchat Spy:
How to Spy Snapchat ?

MobileSpy.io Snapchat spy app allows you to track each and every Snapchat activities of your target remotely. You don’t need to worry about tracking your kid’s Snapchat activity now. 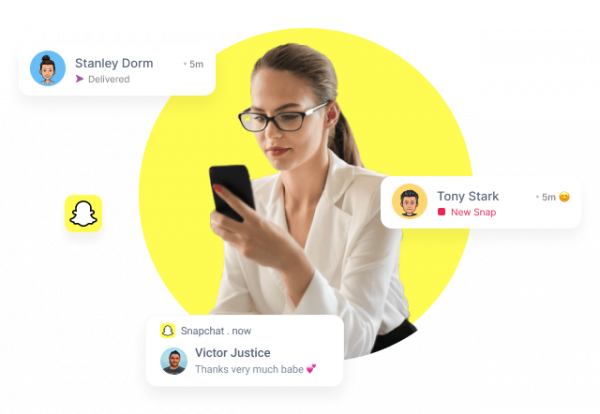 What can Snapchat Spy feature track?

MobileSpy.io Snapchat spy app allows you to track each and every Snapchat activities of your target remotely. Spying on someone’s Snapchat activities requires great deal of effort considering the nature of app; but no more with MobileSpy.io- Snapchat Spy App. It is the best parental control as well as monitoring solutions for parents and business owners.

Spying on someone’s Snapchat app allows you to track details like contact names, profile pictures, phone numbers and many others remotely and without getting detected.

To track someone’s Snapchat account, log in to your MobileSpy.io account. In the home screen, you will see the Social App-Snapchat option in the selection panel on the left. After you open the Snapchat window, you’ll have access to all the Snapchat messages and shared multimedia files on the app. Snapchat Spy app allows you to remain hidden and track all the data. However, you may need physical access to the targeted device for a few minutes.

Why spy on people’s Snapchat?

Snapchat is a popular app for Android and iOS devices that lets users exchange media files like pictures and videos, called snaps, and is made available to the receiver for only a short time before it becomes inaccessible. It’s all about snapping, exchanging and forgetting the little moments. While sending secret messages for kids is super fun, it’s a complicated job for parents to figure out their kids’ Snapchat activities and what their kids are up to. Predators use Snapchat to lure kids into façade and make them things kids shouldn’t be doing.

So, it’s important for parents to get the upper hands and ensure their naïve kids are using the app responsibly. Don’t worry, the MobileSpy.io parental control app delivers what it promises. MobileSpy.io is more than just a spy solution. Business owners need to ensure that their employees are prevented from slacking off during work. Tracking Snapchat activities like Snapchat conversation and exchanged media files on a corporate device will let your employee focus on work.

What will you be able to do with Snapchat Spy App?

There are many phone monitoring or spy apps in the market but not all of them are reliable. MobileSpy.io.io is one of few spy apps that can track someone’s Snapchat use with ease. With the Snapchat Spy app, you will have complete access to the targets cellphone. You can:

Do I need to root or jailbreak the targeted device?

No. While most of the spying app have a prerequisite of jailbreaking or rooting the phone to actually work, MobileSpy.io can do the job on both Android/iOS devices without rooting or jailbreaking. Snapchat Spy feature of MobileSpy.io works with stock Android and iOS.

Snapchat Spy app lets you control your target by keeping them under surveillance. The communication gap between parents and kids in today’s tech-savvy world is used as ammunition by predators. For parents, the Snapchat spy will minimize the risks and protects the kids from bullies, scammers, perverts and sexual predators.

By installing Snapchat spy, parents can know what their children are doing on Snapchat. Snapchat spy app feature allows you to track MobileSpy.io not just spy on Snapchat, it’s much more than that. The irresponsible use of Snapchat is also the biggest concerns for business owners as it directly affects employees’ productivity. Snapchat Spy is the best way to keep employees focused and motivated.

Start Remote Monitoring with these
3 Steps

Sign up for MobileSpy.io account to track online activities of your target. All you need is an existing email ID and you are good to go.

Download and install application on the device you want to spy. It will takes only a handful of minutes.

A Few Words From Our Happy Customers

For about a year now, I’ve been using MobileSpy. Basically, I need to keep track of my team to see what they do during the work hour, that information allows me to make smarter decisions about the company and leadership. Furthermore, I can track their work from any location and can access my data from one location. Really loved this app and appreciate it!

For a mom like me, it’s positive news that we can now use the app to track our kids just to make sure they are all right. I have just found out that the MobileSpy app is offering several functionalities such as monitoring social media, GPS location tracking, website history tracking which is important for digital age parenting. Thank you for these fantastic features in one app.

I was searching for the best way to safely spy on the phone of my husband without him knowing about it then I saw suggestions about the MobileSpy app. I went for it and now I have unrestricted access to his mobile and he doesn’t know about it. It’s amazing that I can spy on his social media apps, call history and even know his location through a GPS location tracker.

I’ve read a lot about the victims of online abusers, cyberbullies, and scammers but I never imagined my daughter would also be the victim of these online abusers. MobileSpy allowed me to bust a guy who sent lewd messages and filthy images to my 14-year-old daughter. I wasn’t able to believe my eyes! Thanks to MobileSpy that I can keep my daughter safe.

I absolutely LOVE MobileSpy! As an entrepreneur, I wanted to keep track and monitor my employees. Thanks to the MobileSpy app it’s possible now. Our productivity has almost tripled for my business since using MobileSpy. The bulk of our staff are virtual workers, so it is important to keep track of their levels of productivity to optimize our team and work efficiently.

I am in awe of what MobileSpy can do for the safety of the family. The reason why MobileSpy fits well for me is that it helps my wife and me to track the mobile of our kids and spy on their phone, SMS even on their social media activities and outside the schedule of our children via GPS. I can stay relieved of my children’s online security now. Full stars from Hudson Fam.

How We Claim To Excel?

Our customer support is prompt to help right when we receive the request from customers.

MobileSpy is a complete cell phone monitoring package for parents and business owners.

89.9% of our current and recurring customers feel satisfied with the services we provide.

MobileSpy is Securing your Digital Space Like No One Else

And Many More! Enjoy advanced monitoring features with MobileSpy.